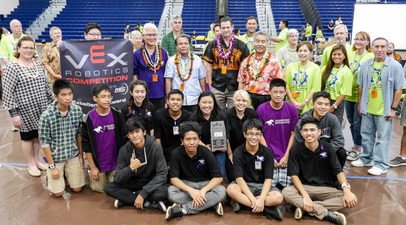 This year Charger Robotics was more than ready to compete.  We were all in fact excited to not only show what we can do, but to also meet new teams from all over the world.
At the beginning of the tournament once the team got inspected they went straight to the practice field and practiced their autonomous, and and both driver and programming skills.  Towards the end of the first night of the tournament they helped set up numerous fields and checked out the different teams and what they had to offer.
The next day the team was ready to go; they started to prep the robot to practice some more so that all autonomous and skills were set in stone; all we were waiting for was the start of qualification matches.  Throughout the day the team was on fire, they new what they were doing and all worked together, and as a result, we got things done, and did everything to the best of our ability.  One person got the batteries, another had the tools and materials just in case, another was talking to alliances, some watched the robot while the drive team was busy, and many others scouted the various teams to see what they were up against.  At the end of the day, we all gave our 110% towards our job; but the tournament wasn't over yet.
The last day of the tournament we were all ready to finish qualification rounds, and start alliance selection.  In the end, team 4142 A was ranked 2nd out of 49 teams, and when it was our turn to choose our alliance we chose 7700R, Rolling Robots because we thought they would best compliment us, and together we could be unstoppable.  The last team that we chose was 813 A, Mid Pacific.
After a long day, the team still persevered and was undefeated the entire tournament.  Then came the finals matches, one of the team members forgot to turn the dial to from left to the right tile, and they ended up losing the autonomous points.  But fortunately, it didn't stop the 4142 A, they just played the game like how it was meant to be played, simple, and fun.  With the right mindset the team could overcome any obstacle thrown in their way, and that is just what they did and team 4142 A undefeated throughout the whole tournament won it all!
Together with their alliance Rolling Robotics, 7700R, and Mid Pacific, 813A, they were invincible.