VEX iq: add it up 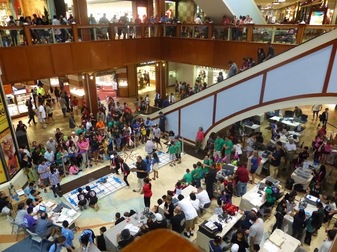 The first Hawaii State VEX IQ Tournament drew a crowd at the Pearlridge Shopping Center on February 16th, 2014.  Along with the competition held in the uptown stage area, there was also a robot demonstration run by Kalani Robotics.  The competition featured 22 teams from around the islands. The kids were excited, not only about the competition, but also about the prospect of going to Anaheim, California (where the World Championship is being held). The robot demonstrations allowed people of all ages the chance to build a bristolbot and to drive a VEX IQ robot.
We are proud of all teams who made it this far and for the teams that are going to Anaheim with us in April, Good Luck! 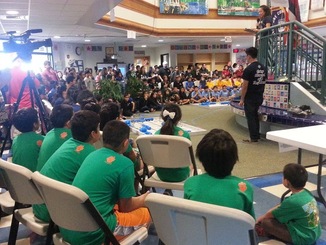 On January the 18th at Island Pacific Academy in Kapolei, the second and final qualifying competition for VEX IQ teams in Hawaii took place. Even before the competition began, the students were eager to begin the challenges of the coming day.  The day was full of excitement as the students had another round of friendly competition. Challenges included Robot Skills, Programming Skills, and the Teamwork Challenge.
The winners of the tournament would be qualified to compete in the Hawaii State VEX IQ Tournament in February, where they would compete with teams around the islands to determine who will go to Anaheim and represent Hawaii in the VEX IQ Challenge. 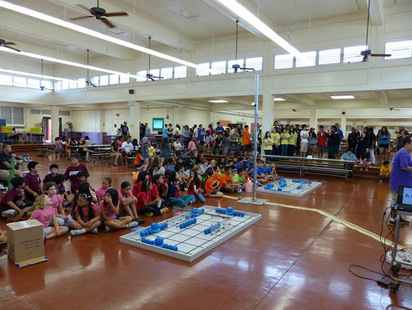 On November 16th the Highlands Intermediate Robotics Team and the Pearl City High School Robotics Team hosted Hawaii's first VEX IQ Tournament at the Pearl City High School Cafeteria.  Nineteen elementary and middle schools from around the state came to compete. This was the first time many teams were able to see the designs of other schools.  They were excited, not only for the competition, but for the chance to meet new friends.
They spent the day competing in the teamwork challenge, and the skills challenge.  In the teamwork challenge two teams pair up and attempt to score as many points as they can.  It is called the teamwork challenge because the students must trade drivers mid-match and because of the cooperation needed between teams to be successful.  There are two types of skills challenges: robot (programming) and driver.  In robot skills the robots move according to a code the students write, therefore, there is no human driver in this challenge.  In driver skills the students drive for two minutes scoring points.
All the volunteers for this competition were from the Highlands Intermediate and Pearl City High School Robotics Teams.  They ran registration, managed the skills field, field re-setting, the selling of BristolBots, queing teams for matches and refereeing as well as helping with concessions, and tournament managing.
"It was cool to see how younger kids were able to build robots from pieces similar to those we use in VEX," said Nik,  a PCHS Robotics team member.